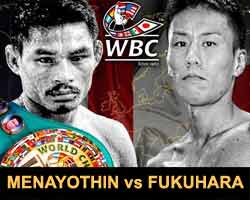 The undefeated Wbc champion Wanheng Menayothin (also known as Chayaphon Moonsri) entered this fight with a perfect boxing record of 48-0-0 (17 knockouts) and he is ranked as the No.2 minimumweight in the world (currently the #1 in this division is Knockout CP Freshmart). He has already fought four times in 2017 beating Melvin Jerusalem (=Menayothin vs Jerusalem), Jaysever Abcede, Omari Kimweri (=Menayothin vs Kimweri) and Jack Amisa.
His opponent, Tatsuya Fukuhara, has an official record of 19-5-6 (7 knockouts) and he entered as the No.13 in the same weight class. He has fought twice in 2017 defeating Moises Calleros (4-stars fight, Calleros vs Fukuhara) and losing to Ryuya Yamanaka (=Fukuhara vs Yamanaka). Menayothin vs Fukuhara is valid for the WBC World minimumweight title (Menayothin’s eighth defense); they also faced each other a second time on May 31, 2019 (Wanheng Menayothin vs Tatsuya Fukuhara 2). Watch the video and rate this fight!