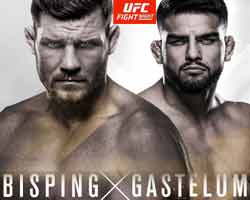 Review by AllTheBestFights.com: 2017-11-25, good finish between Michael Bisping and Kelvin Gastelum: it gets three stars (UFC Performance of the Night).

The former Ufc Mw champion Michael Bisping (who replaces Anderson Silva) entered this fight with a pro mma record of 30-8-0 (67% finishing rate) and he is ranked as the No.5 middleweight in the world. In 2006 he had won over Anderson Silva (=Silva vs Bisping), Luke Rockhold (=Rockhold vs Bisping 2) and Dan Henderson (=Bisping vs Henderson 2) but in his last bout, occurred just 21 days ago, he has been defeated by current #1 Ufc Mw champion Georges St Pierre (=Bisping vs St Pierre).
His opponent, the Tuf 17 winner Kelvin Gastelum, has a record of 13-3-0 (69% finishing rate) and he entered as the No.14 in the same weight class. He has already fought twice in 2017 beating Vitor Belfort (then overturned in a no-contest after he tested positive for marijuana – Belfort vs Gastelum) and losing to Chris Weidman (=Weidman vs Gastelum). Gastelum vs Bisping is the main event of UFC Fight Night 122. Watch the video and rate this fight!