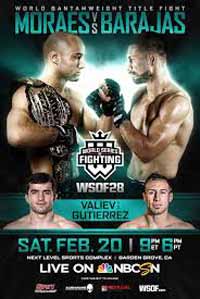 Review by AllTheBestFights.com: 2016-02-20, some good single shots between Marlon Moraes and Joseph Barajas but it is not enough to get three stars: it gets two.

Marlon Moraes entered this fight with a pro mma record of 15-4-1 (67% finishing rate) and he is ranked as the No.7 bantamweight in the world (currently the #1 in this division is Dominick Cruz). He lost two consecutive fights in 2011, against Ralph Acosta and Deividas Taurosevicius, but since then he has won ten bouts beating Sheymon da Silva Moraes in his last one (=Marlon Moraes vs Sheymon Moraes).
His opponent, Joseph Barajas, has a record of 12-1-0 (58% finishing rate) and he suffered his only defeat in 2014, against Sirwan Kakai, after this bout he has won over Aaron Arana and Erik Villalobos. Moraes vs Barajas, main event of the Wsof 28, is valid for the WSOF Bantamweight title (Moraes’ third defense). Watch the video and rate this fight!