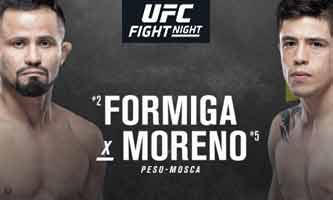 Review by AllTheBestFights.com: 2020-03-14, some good exchanges between Jussier Formiga da Silva and Brandon Moreno but it is not enough to get three stars: it gets two.

The black belt in Bjj and judo Jussier Formiga da Silva entered this fight with a record of 23-6-0 (43% submission victory rate – he has never won via ko/tko) and he is ranked as the No.3 flyweight in the world. He fought twice last year beating currently #1 Ufc Flw champ Deiveson Figueiredo (Jussier Formiga da Silva vs Deiveson Figueiredo) and losing the rematch with Joseph Benavidez (Jussier Formiga da Silva vs Joseph Benavidez 2).
His opponent, Brandon Moreno, has a mma record of 16-5-1 (75% finishing rate) and he entered as the No.7 in the same weight class. He lost two consecutive bouts between 2017 and 2018, with Sergio Pettis (Sergio Pettis vs Brandon Moreno) and Alexandre Pantoja (Brandon Moreno vs Alexandre Pantoja), but then he has collected two victories and one draw beating Kai Kara-France in his last one. Formiga vs Moreno is on the undercard of Kevin Lee vs Charles Oliveira – UFC Fight Night 170. Watch the video and rate this fight!