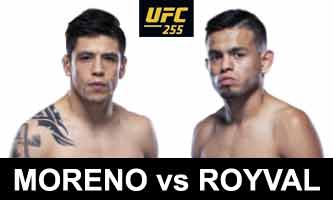 Review by AllTheBestFights.com: 2020-11-21, good exchanges between Brandon Moreno and Brandon Royval: it gets three stars.
Brandon Moreno entered this fight with a pro mma record of 17-5-1 (71% finishing rate) and he is ranked as the No.3 flyweight in the world (currently the #1 in this division is Deiveson Figueiredo). He lost two consecutive bouts between 2017 and 2018, with Sergio Pettis (Sergio Pettis vs Brandon Moreno) and Alexandre Pantoja (Brandon Moreno vs Alexandre Pantoja), but then he has collected three victories and one draw beating Kai Kara-France and Jussier Formiga in his last two (Jussier Formiga da Silva vs Brandon Moreno).
His opponent, Brandon Royval, has a record of 12-4-0 (92% finishing rate) and he entered as the No.9 in the same weight class. He was defeated by Casey Kenney in 2018 but then he has won over Joby Sanchez, Nate Williams, Tim Elliott and Kai Kara France (Kai Kara France vs Brandon Royval). Royval vs Moreno is on the undercard of Deiveson Figueiredo vs Alex Perez – UFC 255. Watch the video and rate this fight!