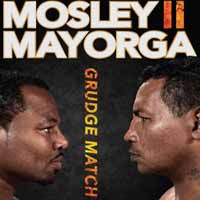 Review by AllTheBestFights.com: 2015-08-29, entertaining fight between Shane Mosley and Ricardo Mayorga: it gets three stars.

The former world champion in three different weight classes Shane Mosley (he is almost 44 years old now, two years older than Mayorga) entered this fight with a professional boxing record of 47-9-1 (39 KOs=83%) but ‘Sugar’ is not ranked as he hasn’t fought since November 27, 2013 when he was defeated by Anthony Mundine (=Mosley vs Mundine).
His opponent, Ricardo Mayorga, has an official record of 31-8-1 (25 KOs=81%) and he has won world titles in two different weight divisions but his last title fight occurred in 2011 when he lost to Miguel Cotto (=Cotto vs Mayorga), since then ‘El Matador’ has fought twice beating Allen Medina (=Mayorga vs Medina) and Andrik Saralegui (=Mayorga vs Saralegui). In their first fight Mosley defeated Mayorga by knockout in the last round (on September 27, 2008). Watch the video and rate this fight!