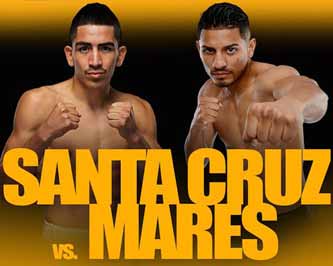 Review by AllTheBestFights.com: 2015-08-29, great fight between Leo Santa Cruz and Abner Mares: it gets three stars.

The undefeated former world champion in two different weight classes Leo Santa Cruz entered this fight with a professional boxing record of 30-0-1 (17 knockouts) and he is ranked as the No.3 super bantamweight in the world. He has already fought twice in 2015 beating Jesus Ruiz (=Santa Cruz vs Ruiz) and Jose Cayetano (=Santa Cruz vs Cayetano).
His opponent, the former world champion in three different weight divisions Abner Mares, has an official record of 29-1-1 (15 knockouts) and he entered as the No.7 featherweight (currently the #1 in this division is Nicholas Walters). He suffered his only loss in 2013 when he faced Jhonny Gonzalez (=Mares vs Gonzalez), after this bout he has won three consecutive fights defeating Arturo Santos Reyes in his last one (=Mares vs Santos Reyes). ‘El Terremoto’ Santa Cruz vs Mares is valid for the WBA Super World featherweight title. Watch the video and rate this fight!