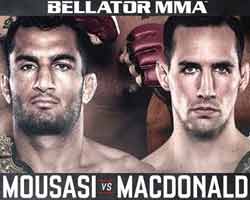 Review by AllTheBestFights.com: 2018-09-29, pretty good finish between Gegard Mousasi and Rory MacDonald but it is not enough to get three stars: it gets two.

The black belt in judo, former Strikeforce light-Hw and current Bellator Mw champion Gegard Mousasi entered this fight with a professional mma record of 44-6-2 (84% finishing rate) and he is ranked as the No.4 middleweight in the world (currently the #1 in this division is Robert Whittaker). He lost to Uriah Hall in their first fight in 2015 (Mousasi vs Hall I) but then he has won seven bouts taking revenge on Hall in 2016 (Mousasi vs Hall 2) and beating Chris Weidman (Weidman vs Mousasi), Alexander Shlemenko (Gegard Mousasi vs Alexander Shlemenko) and Rafael Carvalho in his last three (Rafael Carvalho vs Gegard Mousasi).
His opponent, the black belt in Bjj and current Bellator Ww champion Rory MacDonald, has an official record of 20-4-0 (70% finishing rate) and he entered as the No.8 welterweight. He lost two consecutive bouts between 2015 and 2016, against Robbie Lawler (Lawler vs MacDonald 2) and Stephen Thompson (MacDonald vs Thompson), but then he has defeated Paul Daley (MacDonald vs Daley) and Douglas Lima (Douglas Lima vs Rory MacDonald). Mousasi vs MacDonald, main event of Bellator 206, is valid for the Bellator middleweight title (Mousasi’s first defense). Watch the video and rate this fight!