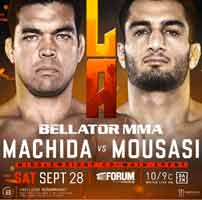 Review by AllTheBestFights.com: 2019-09-28, boring fight between Gegard Mousasi and Lyoto Machida 2: it gets one star!

The black belt in judo, former Strikeforce light-Hw and former Bellator Mw champion Gegard Mousasi entered this fight with a pro mma record of 45-7-2 (84% finishing rate) and he is ranked as the No.5 middleweight in the world (currently the #1 in this division is Robert Whittaker) but he comes off the loss against Rafael Lovato Jr (via majority decision, Gegard Mousasi vs Rafael Lovato Jr). Before this bout, in 2018, he had beat Rafael Carvalho (Rafael Carvalho vs Gegard Mousasi) and Rory MacDonald (Gegard Mousasi vs Rory MacDonald).
His opponent, the black belt in karate, Bjj and former Ufc light-hw champ Lyoto Machida, has a record of 26-8-0 (50% finishing rate) and he entered as the No.12 in the same weight class. He lost three consecutive bouts between 2015 and 2017, the last one against Derek Brunson (Brunson vs Machida) but then he has won four fights defeating Rafael Carvalho (Lyoto Machida vs Rafael Carvalho) and Chael Sonnen in his last two (Lyoto Machida vs Chael Sonnen). In their first bout Machida had defeated Mousasi via unanimous decision (February 15, 2014 – Lyoto Machida vs Gegard Mousasi I); this second fight is on the undercard of Patricio Freire vs Juan Archuleta – Bellator 228. Watch the video and rate this fight!