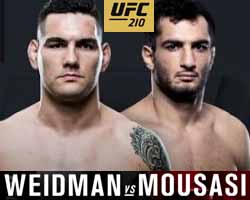 Review by AllTheBestFights.com: 2017-04-08, good fight between Chris Weidman and Gegard Mousasi: it gets three stars.

The black belt in Brazilian jiu-jitsu and former Ufc Mw champion Chris Weidman entered this fight with a pro mma record of 13-2-0 (69% finishing rate) and he is ranked as the No.6 middleweight in the world (currently the #1 in this division is Michael Bisping) but he comes off two consecutive losses, against Luke Rockhold (=Weidman vs Rockhold) and Yoel Romero Palacio (=Weidman vs Romero).
His opponent, the black belt in judo and former Strikeforce light-Hw champion Gegard Mousasi, has a record of 41-6-2 (83% finishing rate) and he entered as the No.5 in the same weight class. He lost to Uriah Hall in their first fight in 2015 (=Mousasi vs Hall I) but then he has won four bouts beating Vitor Belfort (=Mousasi vs Belfort) and taking revenge on Uriah Hall in his last two (=Mousasi vs Hall 2). Gegard Mousasi vs Chris Weidman is on the undercard of Daniel Cormier vs Anthony Johnson 2 – UFC 210. Watch the video and rate this fight!