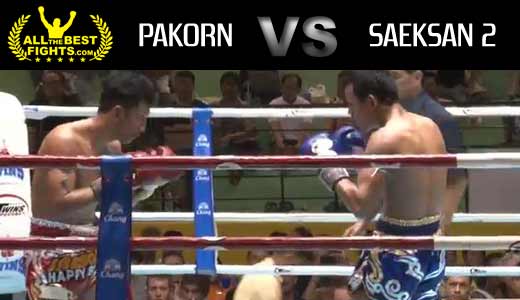 Review: 2014-05-02, two of the best muay thai fighters in a sensational fight thanks to some spectacular techniques, tough exchanges and brutal elbows: this is professional muay thai at his very very best and this is a candidate for Fight of the Year 2014, Pakorn vs Saeksan gets five stars!! Pakorn PKSaenchaimuaythaigym (red trunks), formerly known as Pakorn Sakyothin, had a record of 160-35-5 at the end of 2013 (unfortunately we don’t know the exact record of both fighters), in 2008 he won the Rajadamnern belt and on February 2014 he won the Lumpinee lightweight title defeating Singdam Kiatmuu9; Pakorn is ranked as No.3 super featherweight in the world.
Saeksan Or Kwanmuang (blue trunks), had a record of 81-37-3 on April 6, 2013 (his last four-stars fight we posted: Saeksan vs Stephen Meleady) and he entered as the No.2 in the same weight class. In their first and previous fight Saeksan defeated Pakorn on April 4, 2014; this second bout is the main event at the Lumpinee Boxing Stadium (Bangkok, Thailand). Watch the video and rate this fight!