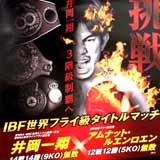 Review: 2014-05-07, close fight but not so exciting: Kazuto Ioka vs Amnat Ruenroeng gets two stars. Both undefeated, the Japanese Kazuto Ioka entered this fight with a pro boxing record of 14-0-0 (9 knockouts) and he is ranked as the No.14 flyweight in the world, he is 25 years old but he has already won world titles in two different weight classes; in his last bout he successfully defended the WBA light-Flw belt against then-undefeated Felix Alvarado (=Ioka vs Alvarado).
His opponent, the Thai Amnat Ruenroeng, has an official record of 12-0-0 (5 knockouts) and he entered as the No.12 in the same weight class, he is 34 years old (nine years older than Ioka) and he has already fought in 2014 winning the vacant IBF Flw belt against Rocky Fuentes (=Fuentes vs Ruenroeng); currently the #1 in this division is Akira Yaegashi. Ioka vs Ruenroeng is valid for the IBF flyweight title (Ruenroeng’s first defense). Watch the video and rate this fight!