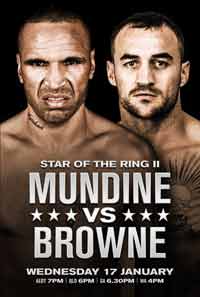 The former world champion in two different weight classes Anthony Mundine entered this fight with a professional boxing record of 47-8-0 (27 knockouts) and he is ranked as the No.22 light heavyweight in the world but he won just one out of his last four fights, against Sergey Rabchenko in 2014 (=Mundine vs Rabchenko). After this bout he has been defeated by Charles Hatley (=Mundine vs Hatley) and Danny Green (=Mundine vs Green 2).
His opponent, Tommy Browne, has an official record of 35-6-2 (13 knockouts) and he entered as the No.79 super welterweight. He suffered his last loss when he faced Leonardo Zappavigna in 2008, since then he has collected nine victories and one draw. Mundine vs Browne is valid for the vacant WBO Oriental middleweight title. Watch the video and rate this fight!

(Free embeddable video hosted on Dailymotion and not uploaded by AllTheBestFights)
https://www.dailymotion.com/video/x6e5uhi