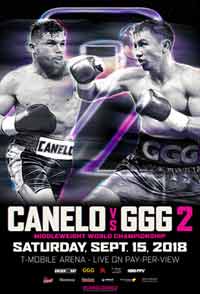 Review by AllTheBestFights.com: 2018-09-15, pretty good fight between Jaime Munguia and Brandon Cook: it gets three stars.

The undefeated current Wbo light-Mw champion Jaime Munguia entered this fight with a perfect boxing record of 30-0-0 (25 KOs=83%) and he is ranked as the No.4 super welterweight in the world (currently the #1 in this division is Jarrett Hurd). He has already fought four times in 2018 winning over Jose Carlos Paz (Jaime Munguia vs Jose Carlos Paz), Johnny Navarrete, Sadam Ali (Sadam Ali vs Jaime Munguia) and Liam Smith (Jaime Munguia vs Liam Smith).
His opponent, Brandon Cook, has an official record of 20-1-0 (13 knockouts) and he entered as the No.40 in the same weight class. He suffered his only loss when he faced Kanat Islam last year (Kanat Islam vs Brandon Cook); after this bout he has won over Hector Carlos Santana and Miguel Angel Suarez. Munguia vs Cook is valid for the WBO World super welterweight title (Munguia’s second defense); undercard of Gennady Golovkin vs Saul Canelo Alvarez 2. Watch the video and rate this fight!

(Free embeddable video hosted on Youtube and not uploaded by AllTheBestFights)
https://www.youtube.com/watch?v=hqM9X3cDT74