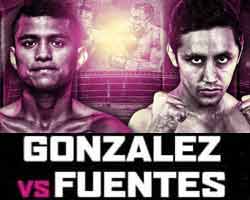 Review by AllTheBestFights.com: 2018-09-15, pretty good fight between Roman Gonzalez and Moises Fuentes: it gets three stars.

The former world champion in four different weight classes Roman Gonzalez entered this fight with a pro boxing record of 46-2-0 (38 KOs=83%) but he is not ranked as he hasn’t fought since September 9, 2017 when he lost the rematch with by Srisaket Sor Rungvisai (Srisaket Sor Rungvisai vs Roman Gonzalez 2). Before this bout ‘Chocolatito’ had lost the first fight with Rungvisai in March (controversial decision, boxing Fight of the Year candidate, Roman Gonzalez vs Srisaket Sor Rungvisai I) and he had beat Carlos Cuadras at the end of 2016 (Carlos Cuadras vs Roman Gonzalez).
His opponent, the former world champion in two different weight classes Moises Fuentes, has a record of 25-5-1 (14 knockouts) and he entered as the No.12 flyweight in the world but he won just one out of his last four fights, against Ulises Lara in 2017 (Fuentes vs Lara II); after this bout he lost to Daigo Higa in 2018 (Daigo Higa vs Moises Fuentes). Gonzalez vs Fuentes is on the undercard of Gennady Golovkin vs Saul Canelo Alvarez 2. Watch the video and rate this fight!

(Free embeddable video hosted on dailymotion and not uploaded by AllTheBestFights)
https://www.dailymotion.com/video/x6tr8bb