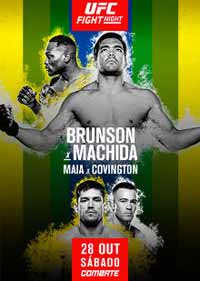 Review by AllTheBestFights.com: 2017-10-28, pretty good fight between Pedro Munhoz and Rob Font: it gets three stars (UFC Performance of the Night).

The black belt in Brazilian jiu-jitsu Pedro Munhoz entered this fight with a mma record of 14-2-0 (71% finishing rate) and he is ranked as the No.15 bantamweight in the world. He was defeated by Jimmie Rivera in 2015 but then he has won over Russell Doane, Justin Scoggins and Damian Stasiak (=Munhoz vs Stasiak).
His opponent, Rob Font, has the same record of 14-2-0 (71% finishing rate) and he entered as the No.22 in the same weight class. He lost to John Lineker last year but then he has beat Matt Schnell and Douglas Silva de Andrade. Munhoz vs Font is on the undercard of Derek Brunson vs Lyoto Machida – UFC Fight Night 119. Watch the video and rate this fight!