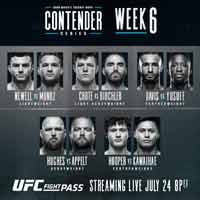 Review by AllTheBestFights.com: 2018-07-24, fight not so exciting between Nick Newell and Alex Munoz: it gets two stars.

The one-armed fighter Nick Newell entered this fight with a professional mma record of 14-1-0 (79% finishing rate) and he suffered his only loss in 2015 when he faced Justin Gaethje in a fight valid for the Wsof Lw belt (Gaethje vs Newell), after this bout he has won over Joe Condon (Newell vs Condon), Tom Marcellino (Nick Newell vs Tom Marcellino) and Sonny Luque.
His opponent, the undefeated Alex Munoz, has an official record of 4-0-0 (75% finishing rate) but he is not ranked as he hasn’t fought since November 19, 2016 when he beat Matheus Ubirajara; before this bout he had also defeated Richie Richardson, Jessie Moreno and Sonnie Anzalduaby. Newell vs Munoz is the main event of Dana White’s Tuesday Night Contender Series – Season 2, Episode 6 – DWTNCS 14. Watch the video and rate this fight!