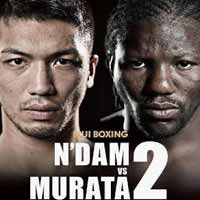 Review by AllTheBestFights.com: 2017-10-22, pretty good fight between Ryota Murata and Hassan N’Dam 2: it gets three stars.

The former Wbo and current Wba Mw champion Hassan N’Dam N’Jikam entered this fight with a boxing record of 36-2-0 (21 knockouts) and he is ranked as the No.10 middleweight in the world (currently the #1 in this division is Saul ‘Canelo’ Alvarez). He lost to David Lemieux in 2015 (=Lemieux vs N’Dam) but then he has won five bouts defeating Tomasz Gargula, Alfonso Blanco (=N’Dam vs Blanco) and Ryota Murata in his last three (=N’Dam vs Ryota Murata I).
His opponent, the 2012 Olympic middleweight gold medalist Ryota Murata, has an official record of 12-1-0 (9 KOs=75%) and he entered as the No.16 in the same weight class. Before losing to N’dam in their first and previous bout (it was a controversial decision in fact the Wba has suspended two judges after their scoring), Murata had fought and won four times in 2016 beating George Tahdooahnippah (=Murata vs Tahdooahnippah) and Bruno Sandoval in his last two (=Murata vs Sandoval). Murata vs N’Dam 2 is valid for the WBA World middleweight title (N’Dam’s first defense). Watch the video and rate this fight!

Their previous fight: Hassan N’Dam N’Jikam vs Ryota Murata I