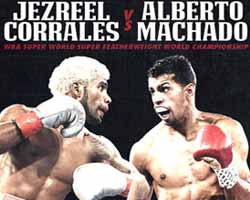 Review by AllTheBestFights.com: 2017-10-21, great finish between Jezreel Corrales and Alberto Machado: it gets three stars.

The Wba super-Fw champion Jezreel Corrales entered this fight with a professional boxing record of 22-1-0 (8 knockouts) and he is ranked as the No.3 super featherweight in the world (currently the #1 in this division is Vasyl Lomachenko). He suffered his only defeat when he faced Jhonatan Arenas in 2009, since then he has collected 21 victories and one no-contest beating twice Takashi Uchiyama in 2016 (=Uchiyama vs Corrales I and Corrales vs Uchiyama II) and Robinson Castellanos in 2017 (=Corrales vs Castellanos).
His opponent, the undefeated Alberto Machado, has a perfect record of 18-0-0 (15 KOs=83%) and he entered as the No.18 in the same weight class. He has already fought twice in 2017 defeating Juan Jose Martinez and Carlos Morales (=Machado vs Morales). Machado vs Corrales is valid for the vacant WBA World super featherweight title (belt on the line for Machado only because Corrales missed weight). Watch the video and rate this fight!