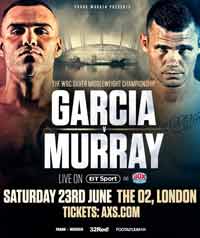 Review by AllTheBestFights.com: 2018-06-23, good fight between Martin Murray and Roberto Garcia: it gets three stars.

The former interim Wba Mw champion Martin Murray entered this fight with a pro boxing record of 36-4-1 (17 knockouts) and he is ranked as the No.9 middleweight in the world (currently the #1 in this division is Gennady Golovkin). He lost to George Groves in 2016 (Murray vs Groves) but then he has won over Nuhu Lawal (Murray vs Lawal), Gabriel Rosado (Murray vs Rosado) and Arman Torosyan (Martin Murray vs Arman Torosyan).
His opponent, Roberto Garcia, has a record of 41-3-0 (24 knockouts) and he entered as the No.26 in the same weight class. He suffered his last loss when he faced Antonio Margarito in 2010, since then he has collected 13 consecutive victories defeating Nestor Fernando Garcia and Omar Chavez in 2017 (Omar Chavez vs Roberto Garcia). Murray vs Garcia is valid for the WBC Silver middleweight title. Watch the video and rate this fight!

(Free embeddable video hosted on Youtube and not uploaded by AllTheBestFights)
https://www.youtube.com/watch?v=aT3y8ZINwsM