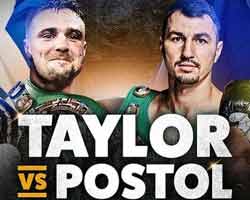 Review by AllTheBestFights.com: 2018-06-23, nice and close fight between Josh Taylor and Viktor Postol: it gets three stars.

The undefeated Josh Taylor entered this fight with a perfect record of 12-0-0 (11 KOs=92%) and he is ranked as the No.5 super lightweight in the world (currently the #1 in this division is Regis Prograis). In his last three bouts he has beat Ohara Davies (Davies vs Taylor), Miguel Vazquez (Josh Taylor vs Miguel Vazquez) and Winston Campos (Josh Taylor vs Winston Campos).
His opponent, the former Wbc light-Ww champion Viktor Postol, has a boxing record of 29-1-0 (12 knockouts) and he entered as the No.2 in the same weight class. He suffered his only loss when he faced Terence Crawford in 2016 (Crawford vs Postol), after this fight, in 2017, he beat Jamshidbek Najmiddinov (Viktor Postol vs Jamshidbek Najmiddinov). Taylor vs Postol is valid for the WBC Silver super lightweight title. Watch the video and rate this fight!

(Free embeddable video hosted on Youtube and not uploaded by AllTheBestFights)
https://www.youtube.com/watch?v=Njw6JVT2zSQ