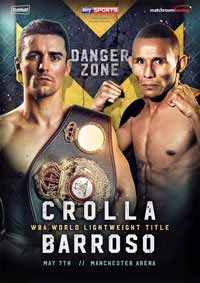 Review by AllTheBestFights.com: 2016-05-07, one sided fight between Martin Murray and Cedric Spera: it gets two stars.

The former interim Wba Mw champion Martin Murray entered this fight with a pro boxing record of 32-3-1 (15 knockouts) and he is ranked as the No.5 super middleweight in the world (currently the #1 in this division is Gilberto Ramirez) while his opponent, Cedric Spera, has a record of 12-4-0 (2 knockouts). Murray comes off the defeats against Arthur Abraham in 2015 (=Abraham vs Murray) while Spera has already fought once in 2016 beating Vladimir Tazik. Murray vs Spera is on the undercard of Anthony Crolla vs Ismael Barroso. Watch the video and rate this fight!