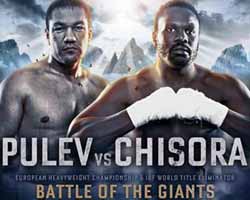 Review by AllTheBestFights.com: 2016-05-07, too much holding and too many interruptions: Kubrat Pulev vs Dereck Chisora gets two stars.

Kubrat Pulev entered this fight with a professional record of 22-1-0 (12 knockouts) and he is ranked as the No.5 heavyweight in the world (currently the #1 in this division is Tyson Fury). He suffered his only loss when he faced Wladimir Klitschko in 2014 (=Klitschko vs Pulev), after this bout he has beat George Arias (=Pulev vs Arias) and Maurice Harris (=Pulev vs Harris).
His opponent, Dereck Chisora, has a boxing record of 25-5-0 (17 knockouts) and he entered as the No.15 in the same weight class. He also lost in 2014, but against Tyson Fury (=Chisora vs Fury 2) and since then he has won five consecutive fights beating Andras Csomor in his last one. Pulev vs Chisora is valid for the vacant EBU (European) heavyweight title; they also faced each other a second time on July 9, 2022 (Dereck Chisora vs Kubrat Pulev 2). Watch the video and rate this fight!