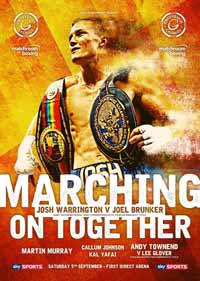 Review by AllTheBestFights.com: 2015-09-05, don’t waste your time watching this fight: Martin Murray vs Jose Miguel Torres gets one star.

Martin Murray entered this fight with a boxing record of 31-2-1 (14 knockouts) and he is ranked as the No.7 super middleweight in the world (currently the #1 in this division is Andre Ward). He has already fought three times in 2015 losing to Gennady Golovkin (=Golovkin vs Murray) but then he came back to win beating George Beroshvili (=Murray vs Beroshvili) and Mirzet Bajrektarevic (=Murray vs Bajrektarevic).
His opponent, Jose Miguel Torres, has an official record of 31-6-0 (27 KOs=87%) and he entered as the No.91 middleweight. He suffered his last loss in 2013 when he faced David Lemieux (=Lemieux vs Torres), since then he has won four consecutive bouts. Murray vs Torres is valid for the vacant WBA Inter-Continental super middleweight title; undercard of Josh Warrington vs Joel Brunker. Watch the video and rate this fight!