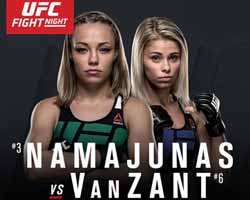 Review by AllTheBestFights.com: 2015-12-10, great performance by both fighters: Paige VanZant vs Rose Namajunas gets three stars (UFC Performance of the Night).

The black belt in tae-kwon-do and karate Rose Namajunas entered this fight with a professional mma record of 3-2-0 (100% submission victory rate – she has never won by ko/tko) and she is ranked as the No.7 women’s strawweight in the world. She suffered two consecutive defeats between 2013 and 2014, against Tecia Torres and Carla Esparza (=Esparza vs Namajunas), but she came back to win in 2015 beating Angela Hill.
Her opponent, Paige VanZant, has an official record of 6-1-0 (50% finishing rate) and she entered as the No.21 in the same weight class. She also lost to Tecia Torres in 2013, but then she has won four consecutive fights defeating Alex Chambers in her last one (=VanZant vs Chambers). Namajunas vs VanZant is the main event of the UFC Fight Night 80. Watch the video and rate this fight!