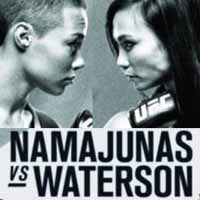 Review by AllTheBestFights.com: 2017-04-15, great performance by both fighters: Rose Namajunas vs Michelle Waterson gets three stars.

The black belt in tae-kwon-do and karate Rose Namajunas entered this fight with a professional record of 5-3-0 (80% submission victory rate – she has never won via ko/tko) and she is ranked as the No.7 women’s strawweight in the world. She fought twice last year beating Tecia Torres (=Namajunas vs Torres 2) and losing to Karolina Kowalkiewicz (=Namajunas vs Kowalkiewicz).
Her opponent, the black belt in American freestyle karate and former Invicta Fc atomweight champion Michelle Waterson, has a mma record of 14-4-0 (86% finishing rate) and she entered as the No.11 in the same weight class. She lost to Herica Tiburcio in 2014 (=Waterson vs Tiburcio) but then he has won over Angela Magana (=Waterson vs Magana) and Paige VanZant (=VanZant vs Waterson). Rose Namajunas vs Michelle Waterson is on the undercard of Demetrious Johnson vs Wilson Reis – UFC on Fox 24. Watch the video and rate this fight!