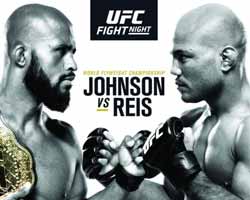 Review by AllTheBestFights.com: 2017-04-15, good fight between Demetrious Johnson and Wilson Reis: it gets three stars (UFC Performance of the Night).

The Ufc Flw champion Demetrious Johnson entered this fight with a mma record of 25-2-1 (56% finishing rate) and he is ranked as the No.1 flyweight in the world. ‘Mighty Mouse’ suffered his last loss when he faced Dominick Cruz in 2011 (= Cruz vs Johnson), since then he has collected one draw and eleven consecutive victories beating Henry Cejudo (=Johnson vs Cejudo) and Tim Elliott in his last two (=Johnson vs Elliott).
His opponent, the black belt in Brazilian jiu-jitsu Wilson Reis, has an official record of 22-6-0 (45% finishing rate) and he entered as the No.7 in the same weight class. He lost to Jussier Formiga da Silva in 2015 but then he has won over Dustin Ortiz, Hector Sandoval and Yuta Sasaki (=Reis vs Sasaki). Demetrious Johnson vs Wilson Reis, main event of UFC on Fox 24, is valid for the Ufc Flyweight title (Johnson’s tenth defense). Watch the video and rate this fight!