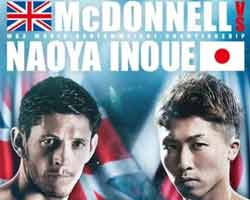 Review by AllTheBestFights.com: 2018-05-25, good start between Jamie McDonnell and Naoya Inoue: it gets three stars.

The former Ibf and current Wba Bw champion Jamie McDonnell entered this fight with a professional boxing record of 29-2-1 (13 knockouts) and he is ranked as the No.6 bantamweight in the world (currently the #1 in this division is Zolani Tete). He suffered his last loss when he faced Lee Haskins in 2008, after this bout he has collected 21 consecutive fights and one no-contest in his last bout with Liborio Solis (Jamie McDonnell vs Liborio Solis II). Before this fight, in 2016, he had beat Fernando Vargas (McDonnell vs Vargas) and Liborio Solis in their first clash (controversial decision, McDonnell vs Solis I).
His opponent, the undefeated world champion in two different weight classes Naoya Inoue, has a perfect record of 15-0-0 (13 KOs=87%) and he entered as the No.2 super flyweight. He fought three times last year winning over Ricardo Rodriguez (Inoue vs Rodriguez), Antonio Nieves (Inoue vs Nieves) and Yoan Boyeaux (Naoya Inoue vs Yoan Boyeaux). McDonnell vs Inoue is valid for the WBA World bantamweight title. Watch the video and rate this fight!

(Free embeddable video hosted on Youtube and not uploaded by AllTheBestFights)
https://www.youtube.com/watch?v=EcF8ZFeIFh0