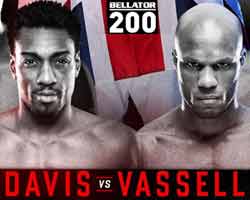 Review by AllTheBestFights.com: 2018-05-25, Phil Davis vs Linton Vassell gets three stars only thanks to a good finish.

The former Bellator light-Hw champion Phil Davis entered this fight with a professional record of 18-4-0 (44% finishing rate) and he is ranked as the No.4 light heavyweight in the world (currently the #1 in this division is Daniel Cormier). He fought twice last year losing to Ryan Bader (Davis vs Bader 2) and beating Leonardo Leite (Phil Davis vs Leonardo Leite).
His opponent, Linton Vassell, has a mma record of 18-6-0 (78% finishing rate) and he entered as the No.7 in the same weight class. He also fought twice in 2017 defeating Liam McGeary (Liam McGeary vs Linton Vassell) and losing to Ryan Bader (Ryan Bader vs Linton Vassell). Davis vs Vassell is on the undercard of Rafael Carvalho vs Gegard Mousasi – Bellator 200. Watch the video and rate this fight!