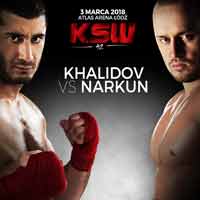 The black belt in karate, tae-kwon-do and KSW champion in two weight classes Mamed Khalidov entered this fight with a mma record of 34-4-2 (88% finishing rate) and he is ranked as the No.14 middleweight in the world. He suffered his last loss when he faced Jorge Santiago in 2010, since then he has collected 14 victories and one draw beating Luke Barnatt (Khalidov vs Barnatt) and Borys Mankowski in 2017 (Mamed Khalidov vs Borys Mankowski).
His opponent, the black belt in Brazilian jiu-jitsu, former M-1 Global and current Ksw light-Hw champion Tomasz Narkun, has an official record of 14-2-0 (100% finishing rate) and he entered as the No.16 light heavyweight. He lost to Goran Reljic in 2014 but then he has won five bouts beating Cassio Barbosa de Oliveira, Rameau Thierry Sokoudjou (Narkun vs Sokoudjou) and Marcin Wojcik in his last three (Tomasz Narkun vs Marcin Wojcik). Khalidov vs Narkun is the main event of KSW 42. Watch the video and rate this fight!