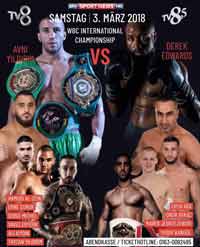 Review by AllTheBestFights.com: 2018-03-03, fight not so exciting between Avni Yildirim and Derek Edwards: it gets two stars.

Avni Yildirim entered this fight with a professional boxing record of 17-1-0 (11 knockouts) and he is ranked as the No.15 super middleweight in the world. He fought four times last year losing once, with Chris Eubank Jr (Chris Eubank Jr vs Avni Yildirim), but then he came back to win in his last bout with Attila Korda.
His opponent, Derek Edwards, has an official record of 27-7-1 (14 knockouts) and he entered as the No.76 in the same weight class but he comes off four consecutive losses, the last one with Lolenga Mock; before the four defeats Edwards had beat Badou Jack in 2014. Yildirim vs Edwards is valid for the WBC International super middleweight title. Watch the video and rate this fight!