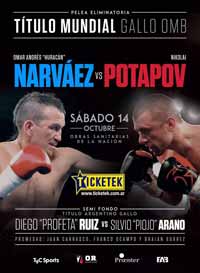 Review by AllTheBestFights.com: 2017-10-14, Omar Narvaez vs Nikolai Potapov gets three stars thanks to a good second part of the fight.

The former world champion in two different weight classes Omar Andres Narvaez (he is 42 years old, 15 years older than Potapov) entered this fight with a pro record of 46-2-2 (24 knockouts) but he is not ranked as he hasn’t fought since June 11, 2016 when he defeated Breilor Teran (=Narvaez vs Teran). ‘El Huracan’ Narvaez suffered his last loss when he faced Naoya Inoue in 2014 (=Narvaez vs Inoue).
His opponent, the undefeated Nikolai Potapov, has an official boxing record of 17-0-1 (8 knockouts) and he entered as the No.26 bantamweight in the world. The only man who stopped him in a draw was Stephon Young last year (=Potapov vs Young): after this bout he has won three fight defeating Antonio Nieves in his last one. Narvaez vs Potapov is the main event of the evening. Watch the video and rate this fight!