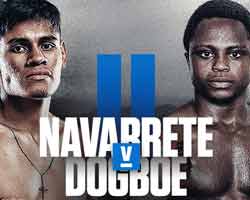 Review by AllTheBestFights.com: 2019-05-11, nice and tough fight between Emanuel Navarrete and Isaac Dogboe 2: it gets three stars.

The Wbo super-Bw champion Emanuel Navarrete entered this fight with a pro record of 26-1-0 (22 KOs=85%) and he is ranked as the No.3 super bantamweight in the world (currently the #1 in this division is Rey Vargas). He suffered his only loss when he faced Daniel Argueta in 2012, since then he has won 21 consecutive bouts defeating Breilor Teran, Jose Sanmartin (Emanuel Navarrete vs Jose Sanmartin) and Isaac Dogboe in his last three (Isaac Dogboe vs Emanuel Navarrete I).
His opponent, the former Olympian and former Wbo super-Bw champ Isaac Dogboe, has an official boxing record of 20-1-0 (14 knockouts) and he entered as the No.4 in the same weight class but he comes off his first loss, suffered against Navarrete in their first bout; before this fight, in 2018, he had beat Cesar Juarez (Isaac Dogboe vs Cesar Juarez), Jessie Magdaleno (Jessie Magdaleno vs Isaac Dogboe) and Hidenori Otake (Isaac Dogboe vs Hidenori Otake). Navarrete vs Dogboe 2 is valid for the WBO World super bantamweight title (Navarrete’s first defense); undercard of Miguel Berchelt vs Francisco Vargas 2. Watch the video and rate this fight!

Their previous fight: Isaac Dogboe vs Emanuel Navarrete I