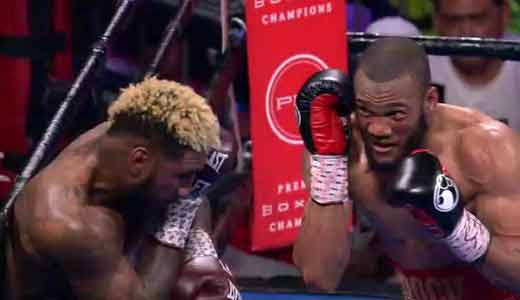 Review by AllTheBestFights.com: 2019-05-11, exciting fight thanks to an amazing performance by both boxers: Jarrett Hurd vs Julian Williams is one of the best boxing fights of the year 2019 and it gets four stars!

The undefeated Ibf, Ibo and Wba super-Ww champion Jarrett Hurd entered this fight with a perfect record of 23-0-0 (16 knockouts) and he is ranked as the No.2 super welterweight in the world (currently the #1 in this division is Jaime Munguia). In his last three bouts he has won over Austin Trout (Jarrett Hurd vs Austin Trout), Erislandy Lara (via split decision, Erislandy Lara vs Jarrett Hurd) and Jason Welborn (Jarrett Hurd vs Jason Welborn).
His opponent, Julian Williams, has a boxing record of 26-1-1 (16 knockouts) and he entered as the No.9 in the same weight class. He suffered his only loss when he faced Jermall Charlo in 2016 (Charlo vs Williams), since then he has won four bouts defeating Nathaniel Gallimore (Julian Williams vs Nathaniel Gallimore ) and Francisco Javier Castro in 2018. Hurd vs Williams is valid for the IBF, IBO and WBA Super World super welterweight titles. Watch the video and rate this fight!