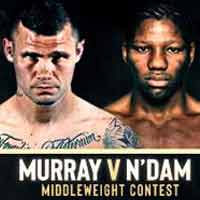 The former interim Wba Mw champion Martin Murray entered this fight with a professional record of 37-4-1 (17 knockouts) and he is ranked as the No.9 middleweight in the world (currently the #1 in this division is Saul ‘Canelo’ Alvarez). He lost to George Groves in 2016 (Murray vs Groves) but then he has won four bouts defeating Arman Torosyan (Martin Murray vs Arman Torosyan) and Roberto Garcia in his last two (Martin Murray vs Roberto Garcia).
His opponent, the former Olympian and former Wbo, Wba Mw champ Hassan N’Dam N’Jikam, has a boxing record of 36-3-0 (21 knockouts) but he is not ranked as he hasn’t fought since October 22, 2017 when he was defeated by Ryota Murata (Hassan N’Dam N’Jikam vs Ryota Murata II); before this fight he had beat Murata but it was a controversial decision (Hassan N’Dam N’Jikam vs Ryota Murata I). Murray vs N’Dam is on the undercard of Josh Warrington vs Carl Frampton. Watch the video and rate this fight!