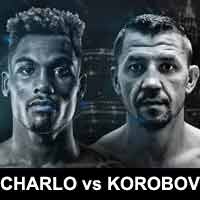 Review by AllTheBestFights.com: 2018-12-22, fight not so exciting between Jermall Charlo and Matt Korobov: it gets two stars.

The undefeated world champion in two different weight classes Jermall Charlo entered this fight with a perfect boxing record of 27-0-0 (21 KOs=78%) and he is ranked as the No.4 middleweight in the world (currently the #1 in this division is Saul ‘Canelo’ Alvarez). In his last three fights he has won over Julian Williams (Charlo vs Williams), Jorge Sebastian Heiland (Jermall Charlo vs Jorge Sebastian Heiland) and Hugo Centeno Jr (Jermall Charlo vs Hugo Centeno Jr).
His opponent, the former Olympian and two times world amateur champ Matt Korobov (also known as Matvey Korobov), has an official record of 28-1-0 (14 knockouts) and he entered as the No.45 in the same weight class. He suffered his only loss when he faced Andy Lee in 2014 (Matt Korobov vs Andy Lee) but since then he has won four bouts beating Jonathan Batista in 2018. Charlo vs Korobov is valid for the interim WBC World middleweight title (Charlo’s first defense). Watch the video and rate this fight!