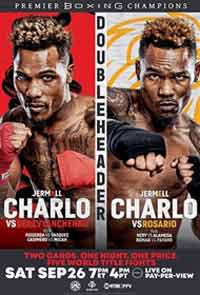 Review by AllTheBestFights.com: 2020-09-26, some good exchanges between Luis Nery and Aaron Alameda but it is not enough to get three stars: it gets two.
Both undefeated, the former Wbc Bw champion Luis Nery entered this fight with a professional record of 30-0-0 (24 KOs=80%) and he is ranked as the No.2 bantamweight in the world (currently the #1 in this division is Naoya Inoue) while his opponent, Aaron Alameda, has a perfect boxing record of 25-0-0 (13 knockouts) and he entered as the No.46 super bantamweight. In their last three bouts ‘Pantera’ Nery has won over Renson Robles (Luis Nery vs Renson Robles), McJoe Arroyo (Luis Nery vs McJoe Arroyo) and Juan Carlos Payano (Luis Nery vs Juan Carlos Payano) while Alameda has beat Salvador Juarez, Breilor Teran and Jordan Escobar. Alameda vs Nery is the vacant WBC World super-bantamweight title; undercard of Jermell Charlo vs Jeison Rosario. Watch the video and rate this fight!