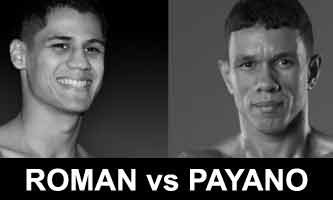 Review by AllTheBestFights.com: 2020-09-26, good performance by both boxers: Daniel Roman vs Juan Carlos Payano gets three stars.
The former Wba and Ibf super-Bw champion Daniel Roman entered this fight with a boxing record of 27-3-1 (10 knockouts) and he is ranked as the No.19 super bantamweight in the world but he comes off the loss against Murodjon Akhmadaliev (via split decision, Daniel Roman vs Murodjon Akhmadaliev); in his previous two bouts he had beat TJ Doheny in 2019 (Daniel Roman vs TJ Doheny) and Gavin McDonnell in 2018 (Daniel Roman vs Gavin McDonnell).
His opponent, the two-time Olympian, former Wba and Ibo Bw champ Juan Carlos Payano, has an official record of 21-3-0 (9 knockouts) and he entered as the No.19 bantamweight but he lost two out of his last three fights, against Naoya Inoue in 2018 (Naoya Inoue vs Juan Carlos Payano) and Luis Nery in 2019 (Luis Nery vs Juan Carlos Payano); between these two bouts he beat Damien Vazquez. Payano vs Roman is on the undercard of Jermell Charlo vs Jeison Rosario. Watch the video and rate this fight!