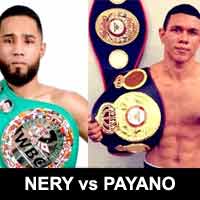 Review by AllTheBestFights.com: 2019-07-20, some good exchanges between Luis Nery and Juan Carlos Payano but it is not enough to get three stars: it gets two.

The undefeated former Wbc Bw champion Luis Nery entered this fight with a perfect boxing record of 29-0-0 (23 KOs=79%) and he is ranked as the No.1 bantamweight in the world. In his last three bouts ‘Pantera’ Nery has won over Jason Canoy (Luis Nery vs Jason Canoy), Renson Robles (Luis Nery vs Renson Robles) and McJoe Arroyo (Luis Nery vs McJoe Arroyo).
His opponent, the two-time Olympian, former Wba and Ibo Bw champion Juan Carlos Payano, has a record of 21-2-0 (9 knockouts) and he entered as the No.21 in the same weight class. He lost to Naoya Inoue last year (Naoya Inoue vs Juan Carlos Payano) but he came back to win against Damien Vazquez in 2019. Nery vs Payano is valid for the WBC Silver bantamweight title; undercard of Manny Pacquiao vs Keith Thurman. Watch the video and rate this fight!