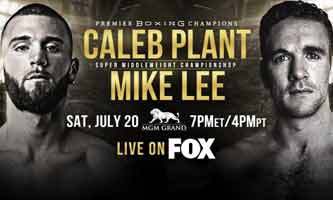 Review by AllTheBestFights.com: 2019-07-20, pretty good fight between Caleb Plant and Mike Lee: it gets three stars.

Both undefeated, the Ibf super-Mw champion Caleb Plant entered this fight with a perfect record of 18-0-0 (10 knockouts) and he is ranked as the No.9 super middleweight in the world while his opponent, Mike Lee, has a boxing record of 21-0-0 (11 knockouts) but he is not ranked as he hasn’t fought since June 8, 2018 when he defeated Jose Hernandez; before this bout, in 2017, he had beat Aaron Quattrocchi and Justin Thomas. In his last three fights Plant has won over Andrew Hernandez, Rogelio Medina and Jose Uzcategui (Jose Uzcategui vs Caleb Plant). Plant vs Lee is valid for the IBF World super middleweight title (Plant’s first defense); undercard of Manny Pacquiao vs Keith Thurman. Watch the video and rate this fight!