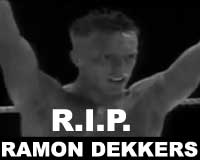 Ramon Dekkers, also known as “The Diamond”, has passed away on Wednesday, February 27, 2013. He was training on his bike in Breda, Netherlands (where he was born and where he lived) when he felt light headed and crashed in a tunnel, he was only 43 years old.

We couldn’t believe to the news when we read it for the first time, it is a really sad moment for all the people who love kickboxing, muay thai and combat sports. He was a legend, or better, he is and he will be a legend: eight time Muay Thai world champion, 221 fights with 186 victories (95 by knockout) and one of the first Western fighters to beat Thai warriors in their homeland. We have grown watching his battles and we love his spectacular, technical and aggressive way of fighting.

R.I.P. Ramon Dekkers, you are one of the best fighters ever.