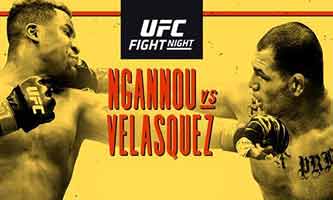 Review by AllTheBestFights.com: 2019-02-17, disappointing fight between Francis Ngannou and Cain Velasquez: it gets two stars.

Francis Ngannou entered this fight with a pro record of 12-3-0 (100% finishing rate) and he is ranked as the No.3 heavyweight in the world (currently the #1 in this division is Daniel Cormier) but he lost two out of his last three fights, against Stipe Miocic (Stipe Miocic vs Francis Ngannou) and Derrick Lewis (Francis Ngannou vs Derrick Lewis); after this bout he has beat Curtis Blaydes in their rematch (Curtis Blaydes vs Francis Ngannou 2).
His opponent, the black belt in Bjj and former Ufc champion Cain Velasquez, has an official mma record of 14-2-0 (86% ko/tko victory rate – he has never won via submission) but he is not ranked as he hasn’t fought since July 9, 2016 when he defeated Travis Browne (Cain Velasquez vs Travis Browne); before this bout, in 2015, he had lost to Fabricio Werdum (Cain Velasquez vs Fabricio Werdum). Ngannou vs Velasquez is the main event of UFC on ESPN 1. Watch the video and rate this fight!