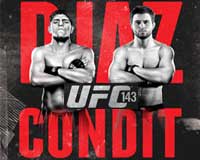 Review: 2012-02-04, more than 23 minutes to go to the ground for the first time, too little action: Nick Diaz vs Carlos Condit was disappointing as well as the judges’ unanimous decision: two stars. Nick Diaz (26-7-0) entered as the No.2 welterweight in the world while Carlos Condit (27-5-0) entered as the No.8. Diaz vs Condit is the main event of UFC 143 and is valid for the interim UFC welterweight title since in the original fight card Georges St Pierre would have had to defend his title but he suffered an anterior cruciate ligament injury. Watch the video!