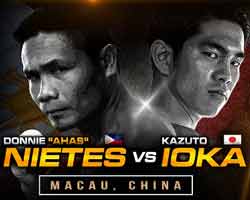 Review by AllTheBestFights.com: 2018-12-31, fight not so exciting between Donnie Nietes and Kazuto Ioka: it gets two stars.

The former world champion in three different weight classes Donnie Nietes entered this fight with a professional record of 41-1-5 (23 knockouts) and he is ranked as the No.4 super flyweight in the world (currently the #1 in this division is Srisaket Sor Rungvisai). He suffered his only loss when he faced Angky Angkotta in 2004, since then he has collected 30 victories and 4 draws beating Juan Carlos Reveco (Donnie Nietes vs Juan Carlos Reveco) and drawing with Aston Palicte in 2018 (Donnie Nietes vs Aston Palicte).
His opponent, former world champ in three different weight divisions as well Kazuto Ioka, has a boxing record of 23-1-0 (13 knockouts) and he entered as the No.3 in the same weight class. He was defeated by Amnat Ruenroeng in 2014 (via split decision, Ioka vs Ruenroeng), but after this bout he has won nine bouts beating Yutthana Kaensa (Ioka vs Kaensa), Nare Yianleang and McWilliams Arroyo in his last three (Kazuto Ioka vs McWilliams Arroyo). Nietes vs Ioka is valid for the vacant WBO World super flyweight title; they also faced each other a second time on July 13, 2022 (Kazuto Ioka vs Donnie Nietes 2). Watch the video and rate this fight!