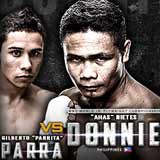 Review by AllTheBestFights.com: 2015-03-28, just some good single shots between Donnie Nietes and Gilberto Parra: it gets two stars.

Donnie Nietes entered this fight with a professional boxing record of 34-1-4 (20 knockouts) and he is ranked as the No.2 light flyweight in the world (currently the #1 in this division is Pedro Guevara); he suffered his only defeat in 2004 when he faced Angky Angkotta losing via split decision, since then he has collected 23 victories and three draws. ‘Ahas’ Nietes fought twice last year beating Moises Fuentes (=Nietes vs Fuentes 2) and Carlos Velarde (=Nietes vs Velarde).
His opponent, Gilberto Parra, has an official record of 19-2-0 (17 KOs=89%) and he entered as the No.35 in the same weight class; he lost in 2013, against Martin Tecuapetla, but after this bout he has collected four victories and one no-contest, against Maximino Flores one month ago. Nietes vs Parra is valid for the WBO World light flyweight title (held by Nietes) – Pinoy Pride 30. Watch the video and rate this fight!