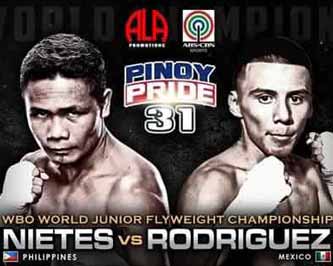 Review by AllTheBestFights.com: 2015-07-11, great fight between Donnie Nietes and Francisco Rodriguez Jr: it gets three stars.

Donnie Nietes entered this fight with a professional boxing record of 35-1-4 (21 knockouts) and he is ranked as the No.2 light flyweight in the world (currently the #1 in this division is Pedro Guevara). He suffered his only loss in 2004 when he faced Angky Angkotta (via split decision), since then he has collected 24 victories and three draws beating Gilberto Parra in his last fight (=Nietes vs Parra).
His opponent, the former Wbo and Ibf minimumweight champion Francisco Rodriguez Jr, has an official record of 17-2-1 (11 knockouts) and he entered as the No.4 in the same weight class. He lost to Roman Gonzalez in 2013 (=Gonzalez vs Rodriguez) but after this fight he has won five times and drawn once, against Jomar Fajardo (=Rodriguez Jr vs Fajardo) who was defeated in their rematch in 2015 (=Rodriguez vs Fajardo 2). Nietes vs Rodriguez is valid for the WBO World light flyweight title (held by Nietes) – Pinoy Pride 31. Watch the video and rate this fight!