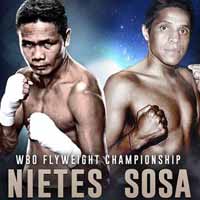 Review by AllTheBestFights.com: 2016-09-24, pretty good fight between Donnie Nietes and Edgar Sosa: it gets three stars.

The world champion in two different weight classes Donnie Nietes entered this fight with a professional record of 38-1-4 (22 knockouts) and he is ranked as the No.1 light flyweight in the world. He suffered his only loss when he faced Angky Angkotta in 2004, since then he has collected 27 victories and 3 draws beating Juan Alejo (=Nietes vs Alejo) and Raul Garcia in his last two bouts (=Nietes vs Garcia).
His opponent, the former Wbc light-Flw champion Edgar Sosa, has a boxing record of 52-9-0 (30 knockouts) and he entered as the No.26 featherweight. He lost to Roman Gonzalez last year (=Gonzalez vs Sosa) but he came back to win in 2016 against Orlando Garcia Guerrero. ‘Ahas’ Nietes vs Sosa is valid for the vacant WBO Inter-Continental flyweight title – Pinoy Pride 38. Watch the video and rate this fight!