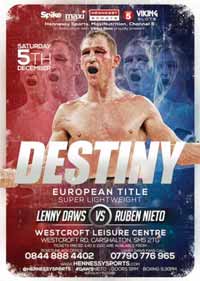 Review by AllTheBestFights.com: 2015-12-05, exciting fight thanks to an amazing performance by both boxers: Lenny Daws vs Ruben Nieto is very close to get four stars!

Lenny Daws entered this fight with a pro record of 30-3-2 (11 knockouts) and he is ranked as the No.36 super lightweight in the world while his opponent, Ruben Nieto, has an official boxing record of 16-1-0 (8 knockouts) and he entered as the No.52 in the same weight class. Both boxers suffered their last loss against Michele Di Rocco: Daws was defeated in 2013 and since then he has won five consecutive fights while Nieto lost to the Italian boxer last year and he came back to win in 2015 beating Zoltan Horvath. Daws vs Nieto is valid for the vacant EBU (European) super lightweight title. Watch the video and rate this fight!