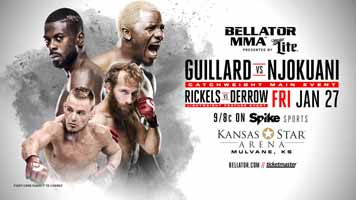 Review by AllTheBestFights.com: 2017-01-27, disappointing fight between Melvin Guillard and Chidi Njokuani: it gets two stars.

Melvin Guillard entered this fight with a professional mma record of 32-16-2 (72% finishing rate) and he is ranked as the No.90 lightweight in the world. He fought twice last year losing to Derek Campos (=Guillard vs Campos) and winning over David Rickels (result overturned in a no-contest after Melvin tested positive for a banned substance, Rickels vs Guillard).
His opponent, Chidi Njokuani, has an official record of 16-4-0 (69% finishing rate) and he entered as the No.48 welterweight. He suffered his last loss when he faced Jeremy Kimball in 2013, since then he has collected seven victories and one no-contest. Melvin Guillard vs Chidi Njokuani is the main event of Bellator 171. Watch the video and rate this fight!