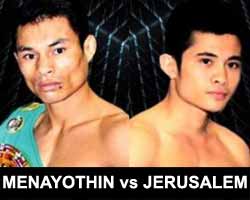 Both undefeated, the Wbc champion Wanheng Menayothin (also known as Chayaphon Moonsri) entered this fight with a perfect boxing record of 44-0-0 (17 knockouts) and he is ranked as the No.1 minimumweight in the world while his opponent, Melvin Jerusalem, has an official record of 11-0-0 (7 knockouts) and he entered as the No.8 in the same weight class. Menayothin fought four times last year beating Go Odaira (=Menayothin vs Odaira), Edo Anggoro, Saul Juarez (=Menayothin vs Juarez) and Silem Serang while Jerusalem fought three times winning over Florante Condes, Jonathan Refugio and Fabio Marfa. Wanheng Menayothin vs Melvin Jerusalem is valid for the WBC World minimumweight title (Menayothin’s sixth defense). Watch the video and rate this fight!